SilverFit – Training and gaming for the elderly

Movement is good for health, but people do it less and less as they age. The Dutch company SilverFit wants to counteract this. Their devices that combine sport and game are primarily aimed at elderly people. Their goal: to give people joy, fun and motivation to move – both in rehabilitation and in daily life. 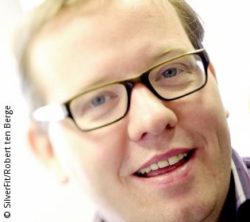 We talk to Joris Wiersinga about the company, the problems physiotherapists have to face and the usage of games in rehabilitation.

Joris Wiersinga: SilverFit is a company from the Netherlands, where we started in 2008. We are a company with 30 people and we are active in 19 countries all over the world, Europe, U.S. and Asia. We make systems for rehabilitation and for activation of elderly people, for example for people who are in a hospital, doing rehabilitation, for prevention or for people who live in a care home and should be active daily. The exercises we provide are not old fashioned and boring, but we provide games, video and music experiences. These are all in an electronic format. So, we have a computer system, which provides a game that lets the user do an exercise.

Who is the target audience?

Wiersinga: Our target audience consists of two groups: First, there are the people using the system. These are elderly people of 75 years and older or people who have had a very big physical event like a stroke or an accident and are in rehabilitation. We also work a lot with people who are in intensive care in a hospital, who cannot walk or move. So, our target group in terms of users are people who have a strong physical hindrance and/or a strong cognitive disability.

Then we have a target group in terms of buyers. These are therapists and facilities where the users are treated or where they live: elderly care homes, rehabilitation centers or the intensive care department of hospitals.

At SilverFit, your use exergames, this means exercises in conjunction with gaming. Why did you come up with this idea?

Wiersinga: At the time when we started the company, in 2008, there was an article called "Sitting and waiting", which described the situation of many elderly people. For us, this was very sad and not the way that it should be. We talked and discussed with many different people, how to address this issue. One of the persons was a physiotherapist who worked in a short stay rehabilitation, which was specialized on elderly care. He already tried to use some games – traditional and also the Nintendo Wii – in his therapy, but it was not the right thing. He asked us to make an easy game that the people could use in the rehabilitation. 'Then the people would exercise much more', he said. We tried it and we had a great success with it. The people are much more active while having fun.

The SilverFit 3D uses a 3D camera to measure the movements of the users and combine it with the game, for example a bingo game; ©SilverFit, Robert ten Berge

What devices and games are available for the patients? Can you give a concrete example?

Wiersinga: One device is the SilverFit 3D, which has a 3D camera included. It is mostly used by a physiotherapist or an occupational therapist to train people to do functional movements, like standing up and sitting down. The SilverFit 3D is often used for stroke patients, but also in many other rehabilitation settings. There is, for example, an exercise where the patient needs to stand up and sit down, a very common exercise in the rehabilitation. With our system two users sit in front of a screen, where a bingo chart for both can be seen. In the middle is a little bingo ball, which shows a number. And when this number is the same as on the chart, the user has to stand up. As both people are doing a small competition between each other, they do not just stand up five but twenty times, because they enjoy the game. In this way, they can have fun while doing their training.

In total, we have nine different devices. There are various games and exercises on each of them, for different areas.

The SilverFit Rephagiais a system for swallowing problems. The game with the kangaroo trains to swallow at the right time; ©SilverFit, Robert ten Berge

What kind of technologies are used in your devices?

Wiersinga: It depends on the movements that you want to do or to train. For example, if the patient wants to do functional training, then all of his movements can be registered with a 3D camera. For our bike or for the strength equipment, we have developed our own sensors that measure for example how far and how fast a bike is moving. For the device that addresses swallowing problems we use surface EMG, which measures the electrical current that is generated by the muscles when you swallow. For each of the various areas we have a different way to capture what is going on and what we translate into the game. The users just see the game and are not confronted with the technology behind the game. One of the most important things that we do is to make the technology as simple as possible for the users, so that it is easy to use.

How do patients profit from SilverFit?

Wiersinga: There are many benefits for the patients. First, the exercises that are medically prescribed are being done more often, longer and with less thought. Often people think that they cannot make a certain movement. But if they are playing a game, suddenly the can make that movement, only because they are not thinking about it. Because the people are focused on the game, they keep on doing their exercises longer and they come back more often to do them. Because of the high motivation of the patients, they have a more intensive rehabilitation or activation. The second thing is that it is extremely good for the mood. Firstly, because of the activity in itself and secondly, because he users are happier after they did some activity together. In elderly care situations, it also helps to prevent a difficult behavior like aggression or depression. This means it can also diminish the number of pharmaceutical medicine that the patient has to use.

The benefits lie in two different areas: in the rehabilitation area, where we provide motivation and intensity of the exercise and therefore a more intensive exercise program. And on the other hand, in the activation in the care home situation where we have the benefits for patients enjoying it, not losing their functional capabilities, less pharmaceutical interventions that are needed and less problematic behaviors.

Whether being old or young – everyone enjoys playing a game. That is the principle SilverFit uses for its systems: combining game and movement; ©panthermedia.net/Arne Trautmann

What benefits do you see for physiotherapy and rehabilitation?

Wiersinga: Normally, a therapist has to spend a lot of time to remind the patients to do the exercises or to push or to motivate. That is taken over by the game. The patients are now enjoying the exercise sessions and are motivated to do the training. The therapist thus has more time to focus on the quality of the movement of the patient. He can help to find better strategies to do a certain movement, because he is no longer busy all the time trying to motivate or persuade. If a patient gets a little bit better, he can do some of the exercises independently, so that two or three persons in a group can be supervised much easier than without such systems.

Another point is that many of our systems record data about the patients, like how a person is performing his tasks, if there are differences between the left and right side of the patient or his progression over time. With these data, the therapist can give the patient an even more individualized therapy, which lead to a better rehabilitation for the patient in the end.

The interview was conducted by Olga Wart.
MEDICA-tradefair.com

Read the article about new technologies in rehabilitation